Then he looked northwards to the land mass that crouched like a great rock sphinx, dark and inscrutable, upon the horizon. This was the Agulhas Cape, the southernmost tip of the African continent.

The Cape Peninsula juts out into the Atlantic at Africa's south western corner. Long and thin, it runs north-south for some 30 miles and is about 7 miles wide at its widest point. The Cape of Good Hope lies at its southern end with Cape Point one mile away at the south east tip, while Table Mountain (3,549 ft) dominates the northern end overlooking Cape Town.

Table Mountain is flanked by the distinctive peaks of Lion's Head and Devil's Peak, and it is these mountains that form the famously spectacular backdrop to Cape Town.

Marching down the west coast of the Cape Peninsula south of Table Mountain, and falling almost sheer to the sea, are the Twelve Apostles.

In 1503, the Portuguese admiral Antonio da Saldanha anchored in the harbour to the north

topped mountain overlooking the bay. He named it Taboa da Caca, Table of the Bay, and the name stuck, both for the mountain and the bay to the north.

The bay to the east of the Cape Peninsula is called False Bay because sailors coming into the bay from the east would often mistake it for Table Bay to the north, raising false hopes that they had reached the sanctuary of Cape Town.

In 1667, the Courtneys were patrolling off Cape Agulhas, at the southernmost tip of the African continent, waiting to waylay Dutch East India Company galleons as they rounded the Cape to call in at Table Bay.

Cape Agulhas, a rocky headland about 100 miles south east of Cape Town, is the southernmost point of the African continent and the point where the Atlantic Ocean meets the Indian Ocean.

Two currents also converge here, the Benguela Current, which brings cold water north and east from the deep Atlantic and flows north up the west coast of Africa, and the Agulhas Current, which brings warm water from the Tropics down the east coast. The waters off the cape are relatively shallow as the continental shelf extends south from here for some 155 miles along what is the Agulhas Bank. This, added to strong westerly winds known as the 'roaring forties', can make for stormy waters around the cape, with mountainous waves and turbulent swells that are extremely hazardous to shipping.

Despite this, ships returning to Europe from the East Indies had to come this way, and they used the Agulhas Current to help them come south down Africa's east coast and round the cape.

The first Europeans to navigate round Africa, and therefore see Cape Agulhas, were the Portuguese in 1498. They found that their compass needles were unaffected by magnetic interference here and pointed true north, and so they named the place 'Cabo das Agulhas', or Cape of Needles. Today, Cape Agulhas is marked by a lighthouse styled after the Pharos in Alexandria. Built in 1848, it is the second oldest working lighthouse in South Africa after the Green Point lighthouse in Cape Town, built in 1824. 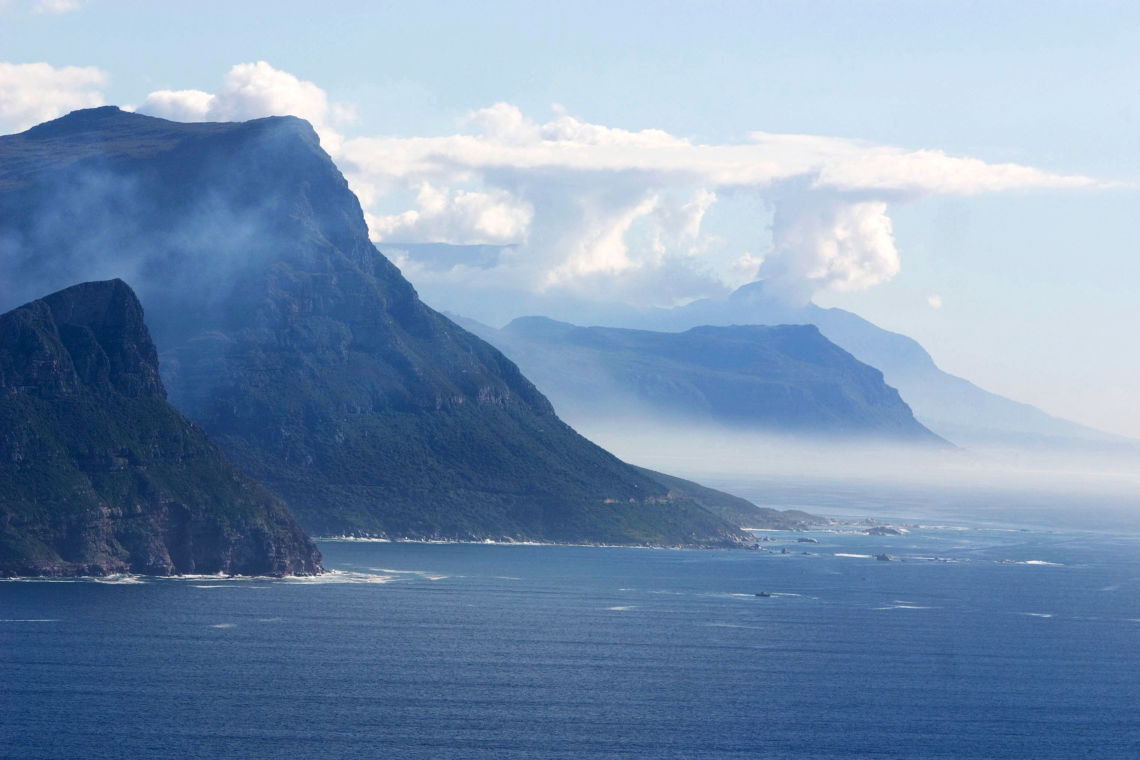 The Dutch Colony established in 1652 on the northern shore of the Cape Peninsula at what is now Cape Town was known as the Kaap de Goede Hoop or Colony of the Cape of Good Hope.

What is now Cape Town began life as the first permanent European settlement in South Africa. The bay to the north of the Cape Peninsula forms one of the few, relatively safe natural harbours along the coast of South West Africa and was an obvious place to build a victualling post for ships rounding the Cape of

Good Hope, especially as there was also a good supply of fresh water running off from the mountains.

In 1652, the Dutch East India Company (the Company) sent their agent Jan van Riebeeck to establish a supply station at Table Bay, in order to replenish ships making the journey to and from their colonies in the Dutch East Indies, now Indonesia. Van Riebeeck and his men began by constructing a small, moated wooden fort by the water's edge on the southern side of the bay, which they called the Fort de Goede Hoop. Then, on the land side of the fort, they planted orchards and a vegetable garden to grow fresh produce for the ships. Called the Company's Garden it was irrigated with water channeled from the rivers coming off Table Mountain.The settlers also bartered for cattle and sheep with the local natives, the Khoikhoi.

The Company's Garden still lies at the heart of modern Cape Town. It is flanked by some of the city's most important buildings such as the Houses of Parliament, St George's Anglican cathedral, the National Museum, and South Africa's first synagogue, built in 1863.

It was not initially intended to establish a colony at Good Hope. Yet, the small company of Dutchmen under van Riebeeck were unable by themselves to produce enough food to sustain both the settlement and supply the passing ships, and so the Company decided to encourage some of its own soldiers and sailors to settle on the Cape Peninsula as farmers. A boarding house was raised next to the fort for new arrivals and a couple of taverns sprang up to cater for visiting sailors.

The town on the Cape soon acquired the name Kaapstaad, or Cape Town, and throughout the 18th century it expanded rapidly. The early farmers interbred with the local Khoikhoi, and slaves were brought in from Central Africa and Asian slaves from the East Indies to help build the castle and work on the farms. The Company also found Cape Town a useful place to deposit orphans and other displaced persons from the Netherlands. Many political and religious refugees from other European countries found passage on the Company's ships and decided to stop off at Cape Town rather than carry on to the east. Prominent amongst these were large numbers of Huguenots fleeing from religious persecution in France. All these disparate groups of people integrated with the Dutch settlers. They learned to speak Dutch and to conform to the Dutch Reformed Church and from this cosmopolitan mix evolved the Afrikaner people.

In 1814, Cape Town was ceded to the British and became the capital of the newly formed Cape Colony. Until the Witwatersrand Gold Rush at the end of the 19th century and the emergence of Johannesburg, Cape Town was the largest city in South Africa.

Today, metropolitan Cape Town is still the second largest city in South Africa, with a population of around 3.75 million, and as the seat of the National Assembly, it is the legislative capital of South Africa.