Elephant Lagoon! As if to justify the name that Sir Francis had given to this harbour, there came a clarion blast from the beach below the forest and Hal laughed with pleasure as he picked out the four huge grey shapes, their ears spread wide, their trunks raised straight and high . . . The bull elephant lifted his long yellow tusks and shook his head until his ears clapped – he trumpeted again.

Elephants are ever present in the Courtney series. In Birds of Prey Hal Courtney delights in seeing the elephants beside the secret lagoon on Africa's southern cape, where his father conceals his ships.

The African elephant is the largest land mammal on Earth, standing between eleven and thirteen feet in height at the shoulder and measuring thirty feet in length from the tip of its outstretched trunk to the tail. A fully-grown male can weigh anything up to six tons (13,440 lbs).

An elephant's skin is typically grey and very tough, about one inch thick on the back and head. It can get sunburned, and to help prevent this elephants wallow in mud and then shower themselves with dust and sand that dries to a protective crust.

An elephant's brain is the largest and heaviest of any land mammal, weighting an average of eleven pounds, and is similar in structure to the human brain. They are undoubtedly highly intelligent and appear to be one of the few species ­– along with apes, dolphins and magpies – who have enough self-awareness to recognise themselves in a mirror. They also remember each other and show great excitement when greeting those who have been away from the group for some time.

Elephants show great companionship and loyalty, frequently touching and nuzzling each other and entwining their trunks. They play, they cry and they look after and protect each other when weak, ill or injured. They even seem to mourn the passing of their friends by gently caressing the skulls and tusks of dead elephants and pausing by their gravesides.

Female elephants live in large groups or herds, ruled by a matriarch. They are able to reproduce from the age of about sixteen, but usually have no more than four calves in their lifetime, since they carry their young for between twenty-two months and two years – the longest pregnancy of any animal – and a calf at birth can weigh around 250 pounds. Male elephants leave the herd, or are encouraged by the matriarch to leave the herd, when they reach twelve years old and lead fairly solitary lives, associating occasionally with other males and with females only to mate. Elephants are known to live for up to seventy years. 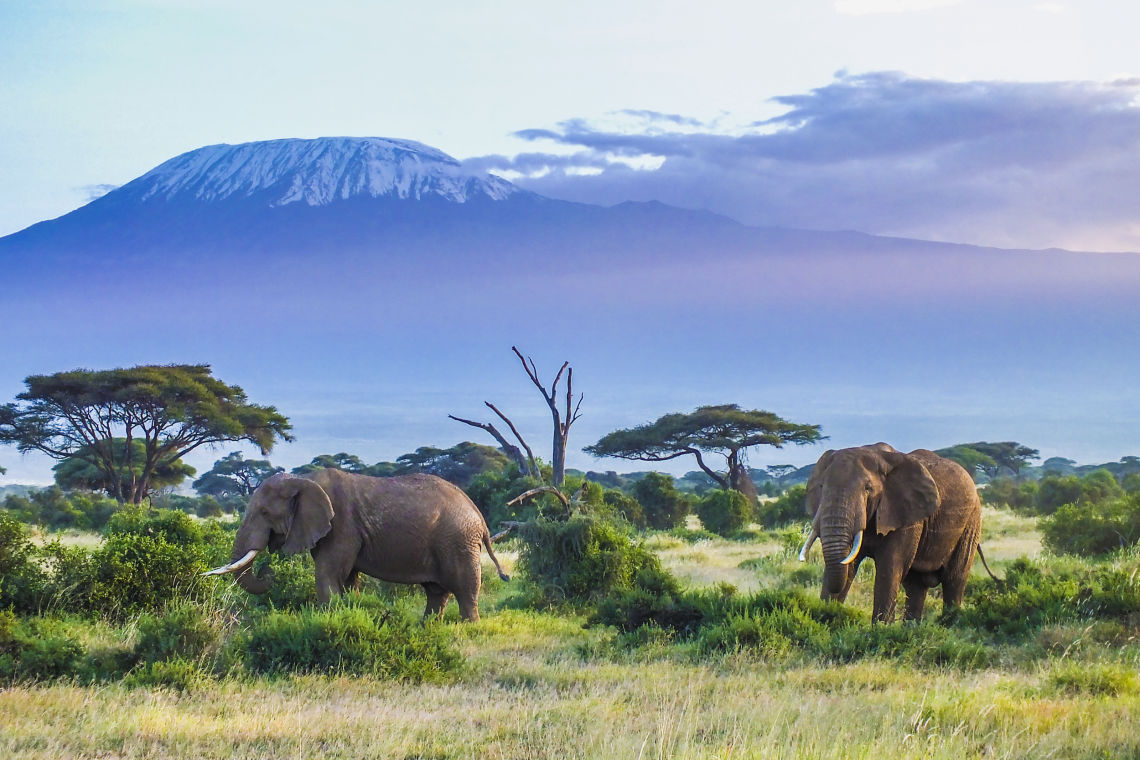 The elephant's most physically distinctive feature is its trunk, which can grow to over six feet long and enables the elephant to reach up to a height of some twenty-three feet, useful for foraging from the high branches of trees. The African elephant's trunk has over 100,000 small muscles, as well as two 'fingers' at the end for grasping food, and is abundantly versatile. To begin with the trunk is used for smelling, with the African elephant having the best sense of smell of any animal in the world, three or four times more efficient than that of a bloodhound. The trunk is also used for breathing and as a snorkel when the elephant is swimming. It is used for digging in the sand for water and for sucking up and storing some two gallons of water at a time for drinking or for showering. It can twist to pick berries and leaves off trees. It can be used for fighting and is incredibly strong, capable of ripping up trees and lifting heavy objects such as baby elephants. It is also surprisingly gentle and is used for hugging or caressing other elephants and for wiping away tears. It helps the elephant to recognise an object or creature by sensing its shape and size and temperature, which is handy since elephants have terrible eyesight. And the trunk is also used for trumpeting – elephants can make themselves heard from many miles away.

The elephant's tusks are made of ivory and are, in fact, enlarged incisors. They can weigh up to 100 pounds – the heaviest tusks ever recorded weighed twice that much, but tusk size is inherited and elephants with larger tusks have been hunted out of existence by poachers. Tusks are used for digging in the sand for water or roots, for peeling the bark from trees, for lifting things and for fighting. Elephants favour one tusk over the other in the same way that humans are right or left-handed.

The hotter the climate an elephant lives in, the larger its ears, for the ears are used to radiate excess heat and cool the blood before it returns to the main body. An elephant's ears are highly sensitive and can pick up very low frequency sounds, way below what the human ear can detect. Spread ears are a sign that the elephant is alarmed or angry.

Elephants walk at about four miles per hour and can 'run' at up to eleven miles per hour. They are very good swimmers and have been known to swim for six hours or more, for a distance of some thirty miles. However, the elephant is the only mammal that cannot jump.

Elephants have no natural predators, although lions will sometimes take the young or the weak if left unprotected. Their numbers have been severely reduced by poaching for their ivory and, despite their adaptability, by loss of habitat for agriculture, logging, mining and urban sprawl. In the last century there were estimated to be between three and five million elephants in Africa, but increasing demand for ivory, particularly in Asia, has led to a surge in poaching, with anything up to 100,000 elephants being killed every year. There are now thought to be only around half a million African elephants in the wild. However, thanks to the ivory trade being made illegal in most countries, the population has now stabilised – although the elephant is still categorised as 'vulnerable’.